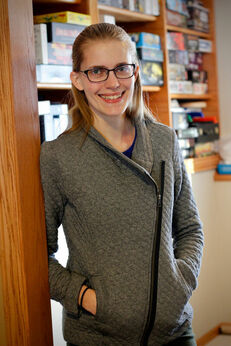 ​My name is Emily Blain. I'm a detail-oriented perfectionist who gets way more annoyed than I should about errors in supposedly professional publications. I graduated from Luther College in 2012 with a liberal arts education, a music major, and an education minor. During my time there, I edited many friends' essays in addition to my own. Since then, I have worked as an administrative assistant and Communications Director in addition to teaching private music lessons.

I believe in the Oxford Comma, one space after a period, and the proper use of apostrophes. ​I have experience proofreading academic work, newsletters, blog posts, and other standard documents, but I specialize in board game rulebooks/components and role-playing games. My husband and I spend a lot of our free time playing games together and I can't help but catch errors and typos on cards or in the rules.
My first big board game project was Theosis, which finished its successful Kickstarter on 7/24/18. I spent a few months working with the Greek designer on Facebook posts and the rulebook in preparation for the Kickstarter launch, and then continued editing some of their Kickstarter updates and posts. Since then, I've worked with designers from all over the US and the world - Greece, Italy, Brazil, Latvia, Australia, India, Texas, California, and more.

My biggest non-game project is the novella A War Drum of Death by Sean Fallon of Smunchy Games. It was a big undertaking, but a blast to work on! Sean and I collaborated via Google docs and were able to go through complicated sections several times to get things just right.